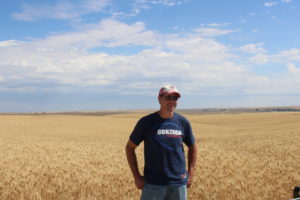 If you’ve ever traveled in central and eastern Washington in the summer, you couldn’t miss seeing the vast wheat fields that seem to go on for miles and miles. Washington farmers planted just over 2.2 million acres of winter and spring wheat in 2016. And more than 90 percent of that wheat was protected by crop insurance.

Mike Abbott grew up on a family farm just north of Davenport, Washington, and now farms with his brother in the areas of Davenport and Harrington. They grow wheat and barley and understand first hand why buying crop insurance is so important.

2015 was not a good year for the Abbotts or any farmer in Washington. An unusual drought affected the state and farms lost more than $335 million in agricultural outputs. The brothers relied on crop insurance for their loss.

“I’d rather not collect crop insurance to be honest with you,” Abbott said. “It’s nice to have, but if there are any critics out there, I’d say take one year in my shoes—on a bad year—and we will see if you like crop insurance, because it has saved most of the farmers out here the past two years.”

Abbott understands and appreciates the government support for crop insurance, which keeps farmers in business and taxpayers off the hook completely when a natural disaster hits.

“The premium [support] that taxpayers pay is very important. On low years—low [harvest] and low commodity price years—anything helps us.”

Mike feels strongly about the importance of agriculture in the United States and keeping the next generation on the farm.

“I have three kids; my son is a junior at the University of Idaho, taking Ag Business. He wants to come back to the farm someday, as well as my brother’s kids. So, it’s important to keep the family farm in business.”

Farmers like Mike and his brother all across the state help support the rural areas where they live.

“Agriculture is very important to the economy around Davenport, Harrington, and all of the small towns,” Abbott said. “It supports the community and without agriculture, the towns would probably [disappear].”