Crop insurance adjusters in the Corn Belt and in other drought-stricken areas have been working long hours to ensure that farmers who have crop damage can get their claims process started. With 5,000 adjusters working in all 50 states, the industry has been forced to move adjusters from regions spared from the drought to regions that have been hardest hit.

Tim Totheroh, a crop insurance adjuster from Wellington, Illinois, says that his workload this year has grown exponentially. “I have two to three times the number of claims I usually have this time of year,” he said. 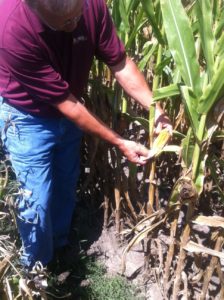 Totheroh explained that in mid-summer, the majority of claims he’s dispatched to adjust are based on requests by farmers who have such low corn yields that they want to chop their corn as silage. “We have to verify what the farmer’s production will be to calculate what their final loss is, and then they are free to chop the corn,” he said. “That way, at least some good comes from a crop that is otherwise nearly useless.”

The claims he reviews in late summer or early fall are generally to determine the final yield per acre that farmers are making so that their loss can be calculated before harvest.

Totheroh notes that he’s been shocked on several occasions this year as he’s walked through once productive cornfields to see nearly complete devastation. “I did a silage appraisal on a field recently, and after walking a half mile through the field in one direction and then exiting the field in another direction, we failed to see a single ear of corn,” he said. “That’s a real jaw dropper, given the usual productivity of this part of the state.”

Totheroh estimates that actual production in his area will range from zero bushels to 130 or 140 bushels per acre, in a part of the state that had an initial potential for 200 bushels per acre if the rain had come.

“The 100 degree heat we had the first week of July just burnt us up.”

Depending on the claim, the adjuster examines the corn itself as well as the overall yield before filling out the final report, which is signed by the farmer before being sent in to complete the crop insurance claim.