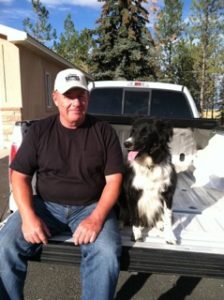 Craig Corbett farms malt and seed barley, along with some wheat on roughly 2,800 acres in Soda Springs, Idaho. Corbett has been farming for more than 30 years and loves what he does for a living. “It’s challenging, it seems like something new pops up every day, and it’s great being in a production-oriented business like farming,” Corbett said.

Corbett explained that when crop insurance first came out, it didn’t work well and many farmers opted not to purchase it.  He said that many commodity organizations and the crop insurance industry have worked over the years with USDA to produce crop insurance products that are effective for producers in different parts of the country, growing vastly different crops.

“It’s hard to have a program that works for one area – like Idaho—while also working for different crops in different areas of the country as well,” Corbett said.   “And the fact that modern crop insurance can do that is a big, big plus.”

Corbett added that while he’s never had a “crop catastrophe,” he has used his policies on a number of occasions, like after going through a really bad hail storm.  “Crop insurance is never going to make you money, but it can keep you from losing your shirt,” he said.

He noted that despite the fact he spends more than $20,000 annually purchasing crop insurance, on most years he doesn’t file a claim. “And every one of those years it was money well spent,” he said.

Corbett said that while he can protect himself against price fluctuations with marketing tools, “the one thing that we can’t have is nothing to sell.”

“If I don’t have anything to market, then I’m done,” he said.   “So if you’re a producer, crop insurance is where you get the most protection for your buck.”

The 2014 Farm Bill made crop insurance the centerpiece of farmers’ risk management tools, and incorporated changes that strengthened crop insurance.  “If the Farm Bill was going to be changed, it needed to change in the direction of helping farmers better manage risk, and the new Farm Bill certainly moved in that direction,” Corbett added.