Florida accounts for roughly 70 percent of the U.S. annual production of citrus, of which the vast majority goes into processing, mostly for orange juice. Citrus is big business in the Sunshine State, and Mike Garavaglia is one of Florida’s many citrus growers who make their living putting fresh citrus on the tables of America’s families.

Mike and his family own and operate 4,000 acres of citrus groves, which have been in the Rogers family for four generations. The family’s business, known as “The Packers of Indian River,” specializes primarily in fresh citrus for consumption – producing oranges, tangerines and grapefruit.

The family’s groves are geographically diverse, spanning three counties on both the east and west coasts of the state, but geographic diversity doesn’t always protect you from the whims of Mother Nature. “We have manageable and unmanageable risks,” says Garavaglia. “We try to eliminate as many of the preventable issues as possible, which include insect damage, bacterial and fungal diseases that attack the tree and crops.”

But what they can’t manage are large weather events like hard freezes, hurricanes and floods. Garavaglia has seen his share of natural disasters, with three hurricanes hitting the groves in 2004 and 2005 — at a time when the groves are especially vulnerable. “By the time August rolls around, you’ve invested about 90 percent of your care taking in the crop, and you are keeping your fingers crossed and hoping for a good harvest,” he said.

But nothing can really protect a grove, or the fruit on the trees, from a hurricane. “The fruit is too immature to harvest, and it’s very susceptible to high winds,” he adds. That’s where crop insurance comes into play. Garavaglia purchases the maximum buy-up of multi-peril insurance, “because over the years, that’s what has proven to work the best for us,” he says.

When a hurricane blows a good portion of the ripening crop onto the ground, “the fruit is shot,” he says. “And if the winds are high enough, it can take the trees years to recover from the damage.”

Another major threat to Florida’s premier citrus industry, and one that made its presence known in 2011, is a “hard freeze” – periods when temperatures go below 28 degrees for four or more hours. This can not only rob a grower of their harvest – which is their income for the year – but can kill the grove as well, if the freeze is long and hard enough. 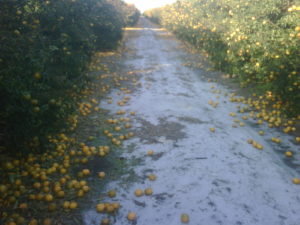 “You can do everything humanly possible to mitigate the damage during a freeze, but you certainly can’t stop it,” he said. Garavaglia says that in the winter of 2010 and 2011, his groves endured three nights of temperatures that were as low as 22 degrees.

“When a freeze is on the way, growers spend a significant amount of money to prevent damage by flooding their groves and installing micro-jet irrigation to mist the trees,” he says. “But when it gets so cold for so long, as it did in 2011, you just know that there is going to be some major damage to the crop, or the trees, or both,” he said.

Unlike other weather events, it’s really impossible to assess the extent of the damage of a hard freeze for weeks, or even months. That’s because when those long, cold nights are finally over, it can take several weeks before the fruit starts to drop. “Initially, we lost about 20 percent of the crop on the ground,” he said. “Done.”

And then over the rest of the season, every box that is brought in has to be specially inspected with samples removed to ensure that parts of the fruit were not dried out from the freeze. ”Even if it stays on the tree, half of what’s remaining can be completely dried out and not marketable,” he notes.

Garavaglia explained that crop insurance is different with citrus than with row crops in the Midwest because it can take months to fully assess the damage.

“Within several weeks of a deep freeze, an adjuster will visit the grove, and he can spend weeks there going through the damage,” said Garavaglia.

“Fruit can continue to drop for two to three months, which means the adjusting can take months before it is complete,” he explains. But even then, the adjuster is often tasked with checking back after harvest to see if any more fruit was lost during inspection. “Because of the length of time it takes to assess the damage, claims can take months to finalize,” he said.

Garavaglia recounted a crop insurance vignette from a decade ago that demonstrated the critical role crop insurance plays in helping growers bounce back from adversity. The family had purchased another grove and had closed on the deal in August. In late December/early January, they were hit with a hard freeze and lost nearly 60 percent of the crop immediately. “You put your whole life savings into a crop every year, and to completely lose a return on an investment, it could wipe you out,” he said.

“If we didn’t have crop insurance, we would have lost the grove.”

Garavaglia says that while crop insurance doesn’t replace a harvest, it’s a critical tool for growers to mitigate some of their biggest risks. “Crop insurance pays for about 65 percent of what it takes to get a crop to market,” he says. “Nobody is making a profit on crop insurance, but it’s a great way to provide some risk mitigation on things we can’t control,” he added.