In 2012, the drought in Kansas was in its second year, and wheat, corn and soybean farmer Paul Penner was just trying to survive to the next season.

Crop insurance has been Penner’s lifeline for the last two years and the years before that. It has given him and his wife, Deborah, the means and security to plan ahead and prepare for another year should the drought persist. “Without it, many farmers, including us, would face financial uncertainty as revenue would be insufficient to cover production expenses,” said Penner, 60, of Hillsboro, which is about 45 miles north of Wichita.

In 2012, the Penners had a 75 percent insurance coverage plan for wheat crops and 70 percent coverage for fall crops, such as corn, soybeans and sorghum. Just like car insurance, his goal is to “never have to use it.”

Penner has been covered by crop insurance policy for more than 25 years now. If not for this federal safety net, he said, “I wouldn’t be in farming today.” 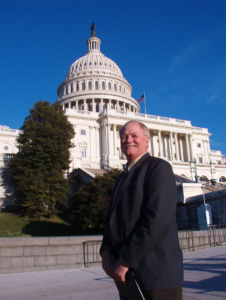 The insurance helps him recover part of his losses. “It pays for a little bit of your crops or production if we had a bad year like the last two to three years’ drought. The insurance pays me a certain percentage of the revenue I have lost. They don’t pay all of it,” he explained. “They will never pay you 100 percent.”

But he said he’s OK with not recovering 100 percent because even in a bad year, he said a farmer does not really lose a 100 percent of his production. “At least you’re given enough so you can pay your bills,” he said.

Insurance estimates are based on actuarial history of crop yield and the price of the commodity, among other parameters. Premiums could be higher for one crop per acre than the other. In Penner’s case, corn has a higher premium cost than wheat and soybeans.

Filing is straightforward process. A farmer reports his losses to the crop insurance agent, and the insurance company will then send an adjuster to verify the claims based on established guidelines. The farmer and the adjuster will work through production data sheets. Once approved, help is on the way.

His agent is a local, family-owned company with businesses around the Midwest. It’s the third insurance company Penner has contracted over the years, as many have folded up and sold their business.

The premium varies year to year. Penner said he has paid anywhere from $8,000 to $20,000 over the years he has been using crop insurance. The federal government picks up part of the premium – about 60 percent – as the cost to the farmer would be “prohibitive.”

With the current mood in Congress to cut the national debt, there are some who would like to see the entire crop insurance bill “disappear,” he said. He asserted not all so-called “subsidies” should be painted with the same brush, and it’s his view that ad hoc disaster legislation “is a thing of the past.”

Like many in Kansas, Penner was born to farm. Kansas ranks sixth in farm exports. Beef, grain sorghum, and wheat – introduced to the state by the early Russian Mennonite settlers – are the major products. Hillsboro, where Penner Farms is located, has a population of about 3,000.

“Farming is a risky business as weather is the biggest uncontrollable factor,” Penner said. “Without an adequate risk management tool like crop insurance, a farmer cannot make marketing plans with the reasonable certainty he will be successful.”

Penner says that he can’t fathom managing all the risks of farming without crop insurance. “Crop insurance is absolutely necessary, period,” he said. He says that what crop insurance helps this country do is to ensure food security — the country’s ability to provide a reliable and safe food supply for its people, and not be forced with “going to China and Brazil to purchase our food.”