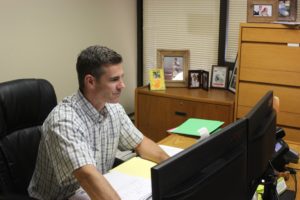 Todd Snider works as a crop insurance agent at Western Ag Crop Insurance Services in Bakersfield, California, and has been working hard to provide crop insurance to farmers in California’s Central Valley for more than 13 years. According to Snider, the two main industries within his county are agriculture and oil.

“There are about 170,000 jobs that are directly related to agriculture in Kern County,” Snider said. “And I would say that’s probably multiplied eight times with all the support industry personnel that come into place, whether you’re a fertilizer salesman, crop insurance, tractors, fuel, parts and on down the line. Even the clothing we wear are made of commodities grown down here in the Central Valley.”

Snider added that a lot of the crops grown in California are categorized as specialty crops, which are not the “average soybeans, corn or wheat.” He noted that specialty growers have much higher inputs than more common crops do and due to the higher inputs, and unpredictability of weather, as well as economic circumstances, crop insurance is something worth budgeting for.

“It’s a lot harder to budget for a zero revenue if you have a severe situation,” Snider said. “With crop insurance at least you know your worst case scenario. You know if you had a freeze that you’d be able to at least cover your costs, pay your employees and keep them employed for the next coming season.”

Another aspect Snider noted is that farmers are competing for labor. If a disaster strikes and the producer cannot pay his employees, it is likely that they will move on to an employer who can. This being said, crop insurance not only helps support the farmer’s crops but it also helps support the entire farming operation.

Within his position, Snider is able to see “the growers protect their legacy and pass it on to the next generation.” One of Snider’s favorite parts about being a crop insurance agent is having the chance to work with a grandfather or father and seeing them pass the family farm onto their next of kin.

“I want to be working with that next generation,” Snider conveyed. “I don’t want to see it be passed to an overseas corporation that can come in and buy out the property just as an investment tool and then move out of it if it’s not a good investment for them. I want to see it stay as a family generational farm.”

Currently, Snider is working alongside other agents to help explain and educate local farmers on Whole Farm Revenue Protection. Snider stated that if a farmer is unaware or not educated on policies that are available to them, they will be less likely to participate in something that could really benefit them and their farm.

Putting the concept of crop insurance into simpler terms, Snider explained that insurance as a whole is a “pool.” He referenced homeowners insurance to best explain the importance. Snider stressed that whether you own a large or small house, both houses still need to be insured. “Maybe you have 20 small homes in a flood area that get wiped out and 10 large homes that are up on the mountainside. If you allow just the small homes to be insured, then there wouldn’t be enough money in the pool to pay for those houses wiped out in the flood. We need the money from the large homes (as well); we need that premium in the pool to pay for losses. Maybe the next year you have the large homes that are wiped out by a landslide on top of the side of the hill.”

After explaining this analogy, Snider applied this back to insuring our nation’s crops. “We need to have a pool of money from large farms and small farms. These growers are contributing this money into the pool and they might go 10 years without a loss. The Midwest may have a loss and then two years later the West Coast, California specialty crop growers might suffer a loss or a drought. We need to have some sort of premiums paid by both types of growers, small and large.”

In the end, Snider said he only wants the best for his county. “As you can tell I’m passionate about agriculture. I’m a Farm Bureau board member as well, here in Kern County. I just want to keep Kern County in the ag industry. I want to keep Kern County competitive. Hopefully it rains for us and we don’t have to talk about the drought long-term, and we can get some more water storage, and we can get back to the hay-day of agriculture.”