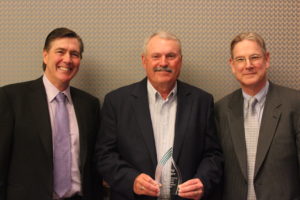 continued in this role for 13 years when, in 1977, he became a full-time employee of North Central Crop Hail (NCCH) as the Office Manager in Eau Claire.

In 1979 and 1980 NCCH started working with FCIC led by Jim Deal to develop the present MPCI program. NCCH was against it at first because it felt that the government should not interfere with the private sector. As time evolved its position changed and in 1981 they entered the MPCI business.

One of Greg’s first duties for the Industry was to serve on a subcommittee for National Crop Insurance Association (NCIA), predecessor to NCIS, to rewrite the FCIC loss instructions and forms in an Industry format. One of the first committees he served on was the Research & Development Committee of the Crop Hail Insurance Actuarial Association (CHIAA), another predecessor to NCIS, which analyzed crop hail rating and underwriting forms.

Greg became a member of the NCIS Board of Directors in February 1989, representing North Central Crop Insurance. During his tenure he served as both Chairman and Vice-Chairman and dedicated much time and effort to ensuring the “voice of crop insurance” was well represented in Congress and throughout the Industry.

Greg later joined the staff of NAU Country and was proud to be part of its growth.