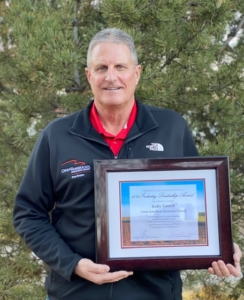 Garrett has more than 27 years of experience in the crop insurance industry. He started in the industry as an agent and in 2000, began working as an adjuster for North Central Crop Insurance as a claims representative.  Garrett currently oversees claims for Great American in western Nebraska, Wyoming, and eastern Colorado. He also helps train agents and adjusters.

Garrett is actively involved with the Nebraska, Iowa, and Colorado/Wyoming NCIS Regional/State Committees.  He is currently serving as Vice Chair for the CO/WY Committee, a position he has held several times, helping to promote crop insurance and setting up adjuster training schools.

“Kelly has always been a leader in the R/S Committees,” said Mark Flohr, National Crop Insurance Services staff liaison. “He involves himself with the operations of the committees and organization of the adjuster schools. He always exhibits courtesy and professionalism.”

For many years Garrett has led the team setting up the CO/WY adjuster schools that covered corn, dry beans, grain sorghum, millet, potatoes, soybeans, sugar beets, sunflowers, and wheat. He possesses in-depth knowledge of many crops and provides instruction during the schools. He arranges guest speakers for the annual meetings and assists with the Nebraska corn schools in Lincoln and Grand Island. He is the first to volunteer for these projects and has been involved with them for more than 15 years.

“I have always been able to count on Kelly to help,” Flohr said. “I know that the committees and adjuster schools are better for everyone because of his participation. The committee members respect him, and he is a tremendous asset to his company and the industry.”

Garrett lives in Kimball, Neb., and is very active in the outdoors whether it is golfing, hunting, or fishing, he will be there enjoying it.