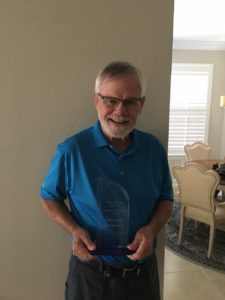 Connealy grew up on a family farm in Eastern Nebraska and graduated from the University of Nebraska – Lincoln in 1976. His first insurance experience was in the farm property business with Employers Mutual in Des Moines, Iowa. His crop insurance career began in 1979 with a crop hail managing general agency (MGA), American Agrisurance (AmAg) out of the Omaha/Council Bluffs area.

Connealy was with AmAg during the period of time that the Crop Insurance Act of 1980 was working its way through Congress. He then attended the public-private sector kickoff event in November of 1980. This landmark meeting included numerous Federal Crop Insurance Corporation (FCIC) people and just as many from dozens of private sector companies interested in the future.

During his time with AmAg, between 1982 and 1983, Connealy was a member of the Crop Hail Insurance Actuarial Association (CHIAA) committee that worked with the FCIC to develop the Actual Production History (APH) program. His service to the industry also included a position on the National Crop Insurance Association (NCIA) Board of Directors in the late 1980s, just prior to the CHIAA/NCIA merger into what is now our National Crop Insurance Services (NCIS) organization.

Connealy remained with AmAg until early in 1991 when he left to join the efforts of Norwest Bank Corporation to enter the crop insurance business. He moved to the Twin Cities area of Minnesota in 1992 as an executive with Crop Hail Management (CHM). The parent company, Norwest, then acquired the original version of National Ag Underwriters (NAU) and merged the two into Rural Community Insurance Services (RCIS).

Connealy spent the next several years as President and CEO of RCIS, which became the industry’s largest provider. During this same period, he contributed valuable time and expertise to NCIS. He spent many years on the NCIS Board of Directors, including advancement through the executive committee and two years as Chairman. The late 1990s and early 2000s were turbulent times for the crop insurance industry – survival was not always certain and leadership from the company executives, including Connealy, was key to moving forward.

Connealy left RCIS and joined Producers Ag Insurance Company (ProAg) in 2006. For the next twelve years, he worked successfully to help make ProAg an industry player on a national scale. His role as President at ProAg was his 5th position as President of an Approved Insurance Provider (AIP). This is perhaps a record in the crop insurance private sector after also having served as President of AmAg, CHM, NAU and RCIS during his long and distinguished career.

Connealy was deeply involved as an industry resource in the negotiation of the Standard Reinsurance Agreement (SRA) with FCIC beginning in the 1980s and including each such session up to and including the SRA released in 2011. Most notably, he was fortunate to testify in front of both agriculture committees of the U.S. House and U.S. Senate, and following the passage of the enabling crop insurance act, he was part of that initial meeting between the FCIC and private industry to determine the transition to this new relationship. This meeting was the seed that led private companies to becoming master marketing contractors with the FCIC to in order to help manage and transition the legacy FCIC business. His historical perspective on this critical subject is likely unmatched in both the current public and private sector.

In April of 2020, after a two-year retirement stint, Connealy accepted an employment offer from Hudson Crop. Despite his 40 plus years of industry accomplishments and contributions, he shared that after his initial enthusiasm with retirement passed, it became apparent that with his good health and still relatively young age, he had more to contribute to the industry he has dedicated so much of his life to.