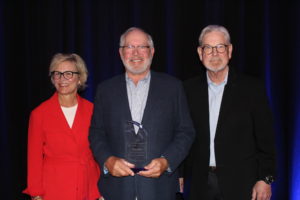 During his 35-year career, Scheef was dedicated to the improvement and success of both the company he founded and the crop insurance industry as a whole. Through his organizational leadership and involvement in crop insurance advocacy, Scheef was a strong voice in the development of the legislation, standards, and procedures that helped shape the industry. Widely respected for his deep affection for agriculture, extensive crop insurance knowledge, and a passion for pushing the boundaries of technology, Scheef truly exemplifies the core values of an industry leader.

For Scheef, a computer programming project in his twenties led to a 35-year career in crop insurance and the creation of the nation’s fifth largest provider of Federal crop insurance. process. With that, the trajectory of his career changed completely.

Scheef was an expert at identifying areas where business inefficiencies could be solved by technology.  He developed several software systems to automate processes for the complex and highly technical crop insurance program, including the first Windows-based crop insurance processing system for personal computers. Scheef founded a software company in 1996 to distribute the product: ARMtech Insurance Services. ARMtech became a Managing General Agency in 1999 and deployed AgriNet, its proprietary crop insurance processing software, for the 2002 reinsurance year. In 2003, under Sam’s guidance, ARMtech became an SRA holder by purchasing American Agri-Business Insurance Company (AA-BIC).

With the development of its Document Imaging system, ARMtech was the first Approved Insurance Provider (AIP) to feature a fully electronic policy file, eliminating the need for cumbersome paperwork storage and shipping. ARMtech also revolutionized the way claims were worked and processed by creating a system that allowed adjusters to scan paperwork directly to auditors. The speed and accuracy of the new process made it possible for producers to receive claims payments much faster than ever before. Scheef’s vision and leadership were instrumental in the development of both these advancements, and many more.

Scheef’s leadership within the crop insurance industry extended beyond ARMtech. He served on the Board of Directors for the American Association of Crop Insurers from 2006-2010, serving as Chairman from 2006-2008. He was also a member of the Crop Insurance and Reinsurance Bureau’s Executive Committee in 2006 and served as Chair of the organization from 2011-2012.

Scheef’s commitment to crop insurance is rivaled only by his devotion to his family and community. One of the founders of Peoples Bank, Sam served on the Board of Directors for 19 years. He currently serves on the Board of Directors for High Point Village, the Texas Tech Therapeutic Riding Center, and the Lubbock Chamber Orchestra. A licensed pilot, Scheef is the Chairman of the Lubbock Preston Smith International Airport Advisory Board. He is married to Jana, and together they have a blended family of five adult children and three grandchildren.