The area of the continental U.S. plagued by drought has more than doubled since February 2011, according to the U.S. Drought Monitor. Even more disturbingly, the portion of the country locked in a level of drought considered “severe, extreme, or exceptional” has increased by more than 400 percent over that same period of time, according to archived data and maps from the first week of February 2011 through the first week of February 2013.

Although one of the biggest stories in agriculture in 2011 was the intense drought and heat wave in the southern plains that seared crops and eventually led to widespread wildfires, only about 24 percent of the continental U.S. was experiencing drought on February 8 of that year, with nine percent of that sample facing “severe, extreme, or exceptional” drought. 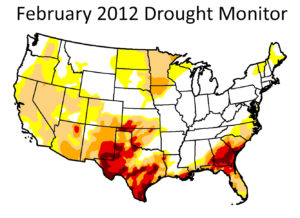 The drought caused major losses that year, and combined with other natural disasters, set a new crop insurance indemnity record of $10.8 billion.

The year 2012, by comparison, started off quite a bit drier, with roughly 38 percent of the continental U.S. in some level of drought by the first week of February, with 18 percent of that area considered “severe, extreme, or exceptional.” The drought continued to intensify and spread into the nation’s breadbasket over the course of the summer, leaving farmers not accustomed to losses with fields that produced little.

The drought was the largest weather story of the year, and caused deep losses for farmers. While crop insurance indemnities have not been finalized, they have already eclipsed the 2011 record by nearly $3 billion. 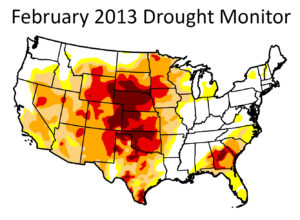 Unless the spring rains break this pattern, 2013 is starting off as an incredibly dry year for many farmers, with roughly 57 percent of the continental U.S. in some level of drought. Forty percent of that area is considered “severe, extreme, or exceptional.” Drought is covering nearly 20 percent more of the continental U.S. than it did a year ago, with the amount of area locked in the most severe stages of drought more than doubling in that same time period.

Looking ahead, unfortunately, the persistence of drought throughout a good portion of the heartland remains a definite possibility.

According to the U.S. Seasonal Drought Outlook, published by the National Oceanic and Atmospheric Administration, a break for farmers doesn’t appear to be in the cards, at least not in the short term. So while farmers are surely praying for rain, it also helps that they can manage their risk through the purchase of crop insurance.